The theme this time was “The Biggest Party Ever”. This refers to the story that Jesus told of the man who invited guests to a large banquet. WHen he had prepared everything he sent his servants to tell the guests that all was ready and that they should now come. However, each guest had an excuse for not coming; one had bought a field and wanted to check it out; one had bought oxen and needed to try them out; a third had just got married so couln’t come. The man therefore told his servants to go out and invite instead the poor, the lame and the blind. With even more room to spare everyone in the highways and byeways  was invites. We are reminded in this story that we are all invited into the family of God and that only by accepting the invitation will we not miss out on the “banquet” of life in Jesus.

There were a large variety of activitieis relating to the theme. Party hats were made, fun was had with doughnut bobbing (eat a suspended doughnut without using your hands) and pictures of favourite food were pasted to the image of a table. There was also an obstacle course for the more active. Several people took the opportunity to make a VIP invitation to invite a friend to come to Messy Church.

In the service the story was retold with some audience participation. Then we learned the chorus for a song which told the story in a video. 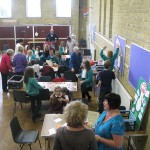 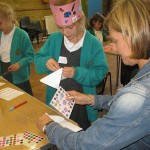 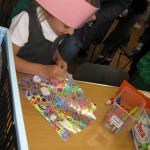 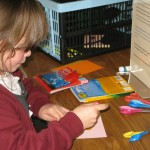 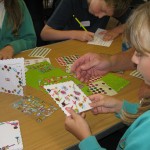 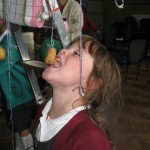