The theme this month was “The Man who wanted Bigger Barns” based on the story of the man who stored all his abundant harvest in newly built large barns in the hope that he could rest and do nothing for some time to come. The story exorts us not to hoard things when others may be in need. Also it reminds us that the things that are precious are not material things. Jesus said “I am the Bread” and also the vine, the way, the light and the life.

Some of the children built a large “barn” in the church for the service later on. Others created harvest baskets and a harvest banner. Food tasting was very popular in which children tasted all sorts of different foods and scored whether they liked them or not (almost everything was liked!). There was also a game in which a suitcase had to be packed as if going away on holiday but there was far too much stuff to fit in the case. The idea was to recognise that we all probably have more stuff than we really need.

The service consisted of playing out the story of the man who wanted bigger barns. Each person had some pieces of corn which we “Grew” as they held them up higher and higher. We then tried to get everyone with their corn into the “barn” built earlier, but it wouldn’t all fit. So we built a bigger barn (the church irself) in which we all fitted – and so we were set to be really lazy now we had all we needed. The children suggested alternative endings such as sharing the harvest or inviting others to join in a celebration.

After the song <Jesus the Lod said “I am the Bread”> and prayers we had an excellent burger and salad meal together. 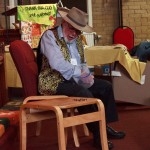 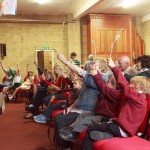 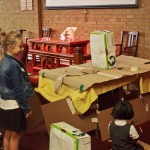 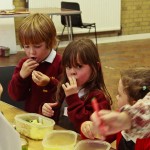 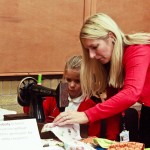 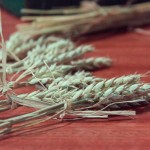 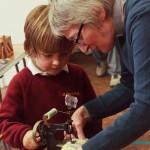