The boy who was sorry

This is the story that Jesus told, best known as “the Prodigal Son” It shows how God’s love is constant and never ending and that being able to recognise when we have made mistakes and to say sorry is to bring us back into a closer relationship with God and others. We also learn the lesson that we are often jealous of other people who appear to be treated more favourably than us; we have to learn to celebrate the success of others and to be willing to support those who have survived bad times even because of their own actions.

The craft activities were all about creating a farm and a city in order to act out the story. Cardboard boxes were taped together to make large city buildings with stickers depicting windows and signs. A road and zebra crossing was made for the city. The farm was made from flat boxes and trays painted in country colours (eg green, blue brown). Tractors were made from clever templates that could be folded into shape. Sheep and other animals were to be found roaming the fields. And there were plenty of trees and plants. Of course, money was needed for the younger brother to spend in the city and this was done by some brass rubbing. This was all a great collective team effort and the final displays were most impressive.

The devotions consisted of telling and acting out the story, with discussions about what the various characters might feel about some of the actions and events. The children enjoyed “spending” all their money in the city. We also thought about what he could do when the money ran out. It was back to a farm to feed the pigs. But the son was very poor and very hungry. He could have eaten the delicious swill he was having to give to the pigs – but it seems the children were not too keen when they were offered some!! The story seemed to end well when the son decided to return home and was welcomed by his father with a feast. We all had a party with party blowers. But it was not quite the end because the older sone was angry and the father had to explain how pleased they were that they had not lost the younger son after all. So plenty of good lessons both about our faith and the way to live our everyday lives.

The afternoon finished with the usual splendid meal based on quiche, but in addition the room was decorated with a “Welcome Home” banner so that we too wre celebrating the end of our story. 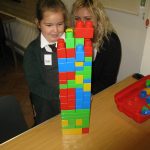 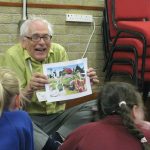 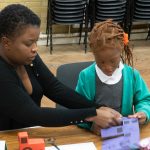 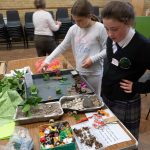 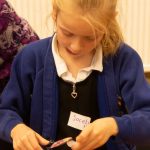 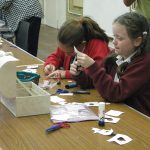 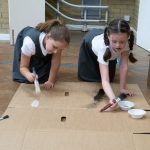 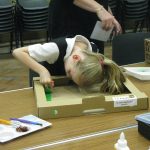 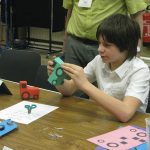 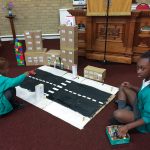 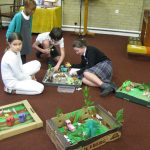 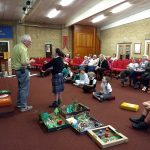 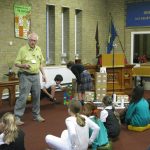 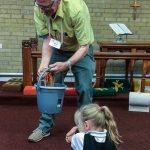 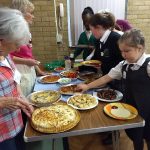