This month we concentrated on the story in which a paralysed man is brough by his friends to a house where Jesus was present.  The friends were sure that Jesus could heal him but the problem was that when they got there the house was so crowded that they could not get in. Not to be thwarted, they climbed onto the roof, made a hole in the roof and lowered the man down to where Jesus was. And their faith was answered in the healing of his paralysis.

The craft activities were all about re-creating the story in models. Everyone made a house from a small cardboard box. Stairs were added to the side to get to the roof. Chains of people were made and decorated from paper. A stretcher was made for the invalid with cardboard and cotton buds. The friends who brought the man were made from pipe cleaners. Everything was done round a single, large workspace which gave a great sense of community.

Kathryn then organised a game in which the children guided a ball round an obstacle course but each child was not allowed to use one body part such as legs or arms or eyes (blindfolded).

The worship included acting out the story in an imaginitve way thinking about being in a crowded room and a person suddenly appearing from a hole in the roof. We considered what various people in the story might have thought about what happened.

The session finished with a meal of fish fingers, chips and peas, followed by ice cream with a gingerbread man to match the day’s story. 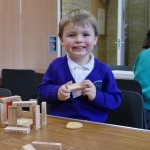 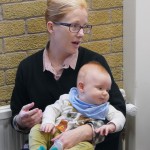 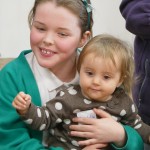 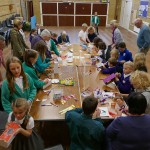 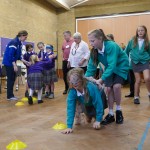 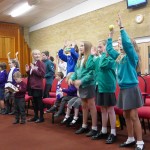