‘Light up the darkness’ was our theme.  In a darkened room a lamp was switched on and, as it was glaring, covered with a basket.  The children thought this was not a good idea so the lamp was uncovered again.  The Bible passage Matthew 5.14-16 told us ‘You are the light of the world, no-one lights a lamp and then covers it with a basket.  It is put on a stand to give light to the world’.  Stories lit up at Blackpool illuminations led to a picture of a monk making illuminated lettering in a Bible copy telling stories that help us to light up the world.

Children drew a big initial of their name and then illuminated it with glitter.  They also made a jam jar decorated lantern with a light stick inside to make it glow.  Finally they made a ‘mad hat’ to wear showing they would light up their world.

In worship puppets told the story again.  A dark cross had been marked on the floor to represent a dark world.  The children quietly put their lanterns on it to light it up.  Jim talked about Hallow-een, the evening before All Hallows or, as we now call it, All Saints Day when we celebrate lots of people whose goodness has lit up our world.  The children were encouraged to keep their illuminated initial, lantern and mad hat to bring out again on the morning after Halloween and set themselves to light up their world.

A prayer, song with lots of percussion and then yummy food brought things to a close. 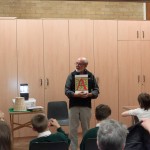 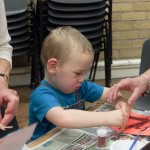 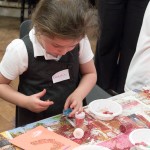 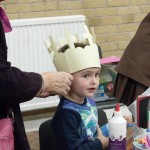 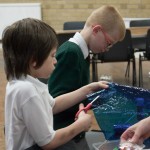 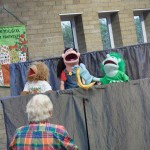