For God so loved the world that he gave his own son. This was our last meeting before Christmas so once more we were challenged to tell the Good News of Christmas. Jim used the image of the of the nativity scene which contains so many elements of the Christmas story. The children were invited to say who should be in the scene and why. We clearly have Messy Church members who know all the key elements of the Christmas story! In the craft activities there was an opportunity to make Christmas decorations, Baby in a manger crispy cakes, painted stones illustrated with Christmas themes to put at the base of the Christmas tree at home. There was also a world map to show that God loves the whole world; the children searched for places of particular concern that we need to pray for, including our own church project of Kakrao in Kenya. Some fun was also had by using Post-It notes on which symbols were drawn to illustrate Christmas messages – the challenge was to draw as many as possible in one minute and stick them onto Brian who, by the end, looked like a bird with feathers!

The worship consisted of building up a nativity scene, asking the children to suggest who should be there and then add the character or item to the scene; we almost forgot to add Jesus until the end! Chris then introduced us to some Christmas songs which he led on the guitar. The whole afternoon was great fun and after a substantial meal of pasta with chicken  casserole and vegetables followed by swiss roll and ice-cream everyone went home with a goody bag of things to do and things to eat (chocolate santa). 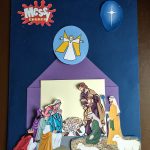 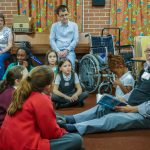 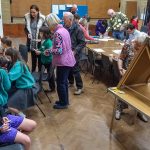 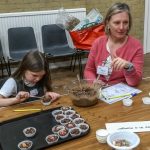 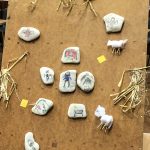 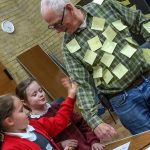 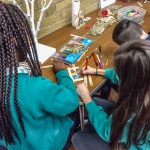 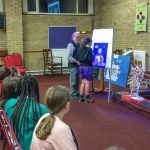 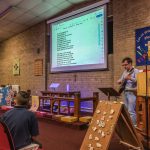 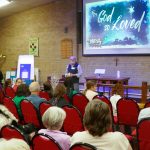 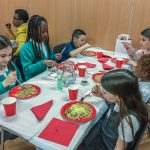