The theme for today was “Powerlessness at Christmas”. This allows us to concentrate on the baby Jesus himself – born in a very ordinary setting. The tiny baby does not make us think of power. Yet we should think about what became of that baby and what an influence he had on the world, leading us to our church today.

The craft activities were associated with that ordinary setting. The children made nativity scenes using old shoe boxes. Each scene had a plaster of paris model of Jesus in the manger which the children had fun painting. Many children made animal masks which they wore later in the worship to emphasise the stable setting in the story. Some children made angels to celebrate the coming. In the church a chair was adorned with all sorts of “junk” to make a junk throne, illustrating the power and influence that can come from powerlessness.

For our worship we had a special guest – 8 months old Mary-Kate with her Mum, Lisa. They helped us to discuss what a baby can do – not a lot –  but also what effect a baby has coming into the family. The family life changes completely, from changes to routine, to changes in the house to changes in your social life. So the powerless child still has a huge influence. So it was with Jesus. He was apparently so powerless in the stable at his birth, but the way he lived his life influenced the world and brings us to church today. 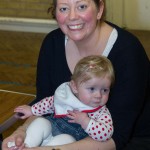 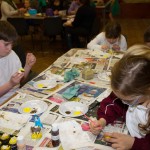 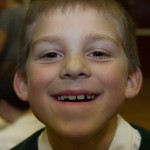 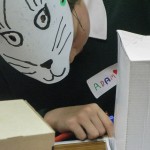 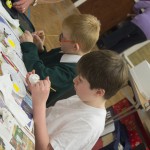 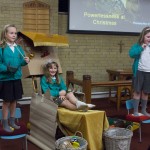 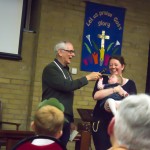