The theme this time was “The Good Samaritan”. When Jesus was asked “Who is my neighbour?” he told the story of the man who was set upon and of the three people who passed by, only the Samaritan stopped to help. It is the one who helped who was the good neighbour.

The chldren enjoyed a number of activities relating to this story. They had mock injuries which were bandaged up, sometimes almost covering the whole body!  There was a road which gradually became filled with vehicles of all sorts made with cardboard boxes and other “junk”. Road signs were made illustrating various hazards, not just the ones we see in real life on the roads. The idea of lolypop ladies who help us cross the road was expressed as circular, decorated biscuits.

In worship the story was retold by some of the children acting the different parts with excellent dramatic effect. The message of being a good neighbour was drawn out. It is not just being there for someone with visible hurts but also noticing those who are hurting or sad inside and doing what we can to help.

As usual a hearty meal was enjoyed by all. Almost 50 people shared in pasta with bolognaise sauce, peas, sweetcorn and cheese, followed by jelly and cakes. 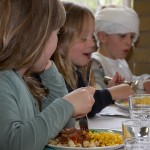 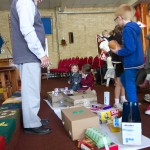 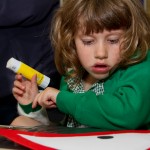 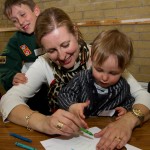 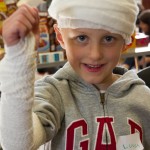 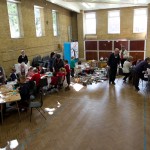 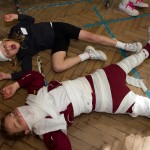