Consider the Birds of the Air

This session was about dealing with worry. Jesus says we should not worry about the future as God will provice – birds don’t have to reap and sow and store food in barns. Nevertheless, as humans we do worry and this is sometimes good because it shows we care. But there are things about ourselves, that make us who we are, that we may worry about if they make us feel different from others. There are also occasions when we worry when asked to do something because we are not sure whther we can or we are a bit frightened that it may not go well. But we are assured that we are all different. We are all individuals with our own personality and are own skills. We are loved for who we are and not for what we can do or what we look like. We learned also that we can help each other by being suportive when we know someone is woorying.

The craft activiites reflected a number of aspects re;ating to the theme. Children had an opportunity to dress up to look silly, including face-painting and they could see what they looked like in a mirror. They made a head full of sawdust and grass seeds to take home, water and grow. They worked out how to make a bridge out of rolled up newspapers so that it would support tins of food (how many could your bridge support?). There was also a “worry bowl” for children to make worries disappear by dissolving a coloured sugar cube representing a worry in a bowl of water so that it disappears.

In the devotions, Brian told the story of “The Ugly Duckling”. We thought that the dusckling was different rather than ugly and he eventually became what he was meant to be, just as all of us can become what God wants us to be. The song was “If I were a Butterfly” during which the children tried to make signs to represent all the animals as they appear in the song.

The afternoon concluded with a meal of pasta and bolognaise sauce with mixed vegetables and cheese, followed by sponge roll with ice cream. 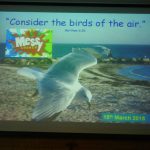 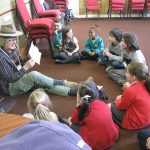 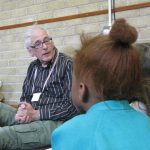 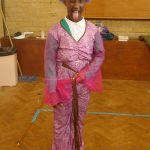 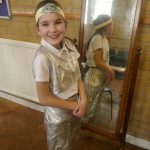 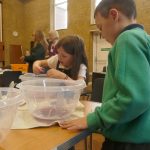 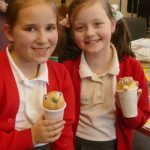 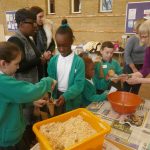 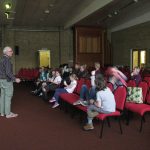