Parables of the hidden treasure and the pearls

“The kingdom of heaven is like treasure hidden in a field. When a man found it, he hid it again, sold all he had and bought that field. Again, the kingdom of heaven is like a merchant looking for fine pearls. When he found one of great value, he went away and sold everything he had and bought it”. This session served to explore the idea that the Kingdom of God is worth striving for. The weather was bright and sunny so we could spend the afternoon in the garden. Activities included a treasure hunt (items such as a jam pot hidden in a tree!), a search for “pearls” in a large tub of slime, making a treasure map and making a treasure chest money box to take home. The worship took the form of a puppet show telling the story of the valuable pearl. The children were involved in buying items to generate the money needed to buy the precious pearl. The outdoor meal was hotdogs and salad followed by sponge roll and ice cream. 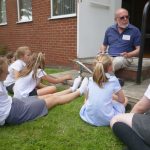 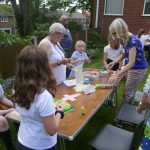 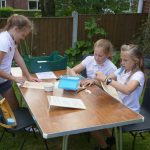 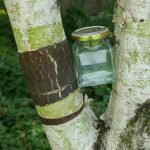 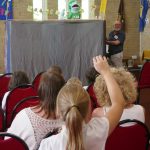