The Temptations of Jesus

Today, we looked at the story in which Jesus is in the wilderness thinking about his ministry and deciding how best to bring the message of God to His people. He could change the desert stones into bread but “man cannot live on bread alone” We need more than “things” to bring us a happy life. He could throw himself from a high tower to show that God would always save him. But then we would just think of him as we now think of Superman – a super-hero who has no real connection with us. He could be tempted to rule the country like a king and use his power to control everything we do. But that sort of power makes many feel powerless. What we need is an inner strength that comes from God that allows us to be ourselves as God made us and use our gifts and talents to bring peace and love to God’s world.

Craft activities, as usual followed the theme. The children enjoyed the messyness of  making bread rolls that were baked ready for tea. A great game of noughts and crosses was devised in which the counters were stones or bagles. There was the opportunity to make a mobile hung with images relating to the temptations. Children also played “Twister” and tried not to give in to the temptation to cheat when their limbs wouldn’t go where they were supposed to. Then there was the tower; make the tallest tower you can from old cardboard boxes. As you can see in the pictures, the height achieved was amazing.

In worship we acted out the temptation stories. For the stones that might be turned to bread we had sweets scattered on the floor – but we managed to say “No” to temptation (until we distributed them at tea time!). The communion kneeling rail made a good ledge from which we imagined we could jump or fly like superman. The same rail made a good vantage point for thinking about the power it might be nice to exercise – perhaps owning the television remote control or doing all the shopping. We noted that with such power we would also succeed in depriving others of what they might want or need.  So the conclusion was that we should not need to do amazing things to be loved and accepted because Jesus showed us that he rejected this way. We need to be ourselves and be the best we can be.

The meal today was pasta with chicken and vegetables. There was certainly plenty of it as there were fewer than usual children present. But those who were there seemd to enjoy it as usual. 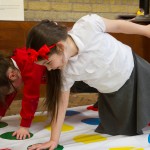 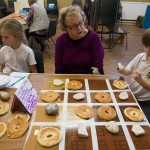 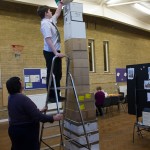 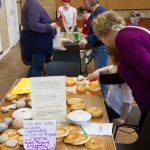 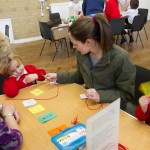 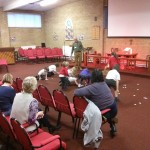