This month the theme was based on the last words Jesus says to his disciples at the end of Matthew’s gospel – “Go and make all nations my disciples”. Telling other people about God and about Jesus can seem difficult but there are many ways to tell the story. Messy Church tells a story each time it meets, often by activities, symbolism and the way we look after and care for each other. So the task for today was firstly to get used to talking with people we don’t know so well which will help us to overcome the barrier to telling the story of Jesus, secondly to think about what we would want to tell about God and Jesys, and thirdly to tell the story in worship.

We had only three craft activities, all of which involved making something that could be used to tell someone about Jesus. Firstly we made paper planes that could be flown or passed around. Secondly each person made a microphone from a cardboard tube to be able to “shout aloud” the story. Thirdly, we made a pyramid with messages about God’s message on its sides.

Then Kathryn worked with the children on two team exercises. The first involved passing the planes with their messages along the team’s line, under the legs and over the head. Two teams had fun competing to finish first. Then, the two teams competed in an obstacle course in which a foam javelin was the message which had to be held carefully while negotiating the obstacles and then thrown to the next team member.

In the worship we talked about how what we had done helped us to tell God’s story. We then used pictures from our last Messy Church to show how we are always telling the story when we meet. In this case it was the way in which we prepared for and then went through the story of the passover meal and the last supper. Lily and Oliver told us what they remembered about our Last Supper story and so they also were “telling the story”. The children enjoyed seeing pictures of themselves taking part in the March session.

The meal consisted of pizza and pasta with salad followed by jelly and ice cream. 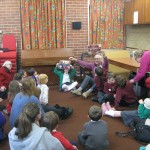 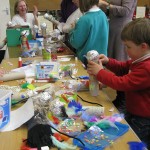 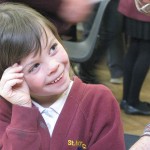 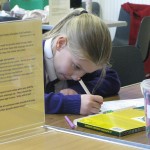 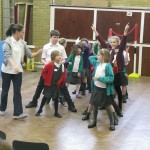 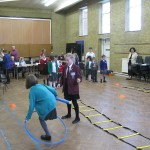 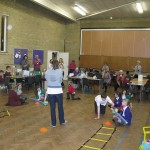 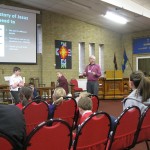