This month Messy Church took as its theme the story that Jesus told of the Prodigal Son. The story was brought to life by props made by the young people themselves during their craft period. The main characters (father and two sons) were made as were the two sites of action – a farm and a city. The farm had lots of animals, a farm house and an enclosed field. The city was made from all sorts of “junk” – cardboard boxes, cereal packets, yoghurt pots etc – and included , shops, houses and factories. Coins were also made to add to a stock of chocolate coins that formed the basis of the extravagant spending of the younger son when he left the farm for the city. The greatest impact was probably the “pigswill” that the younger son had to feed to the pigs, but which he was sorely tempted to eat himself as he was so hungry. It was a horrible-looking mixture of jelly and food scraps which tempted no-one.

The session was well-attended and the hot-dogs and pizza with salad followed by a selection of sponge puddings and cakes was much appreciated. The pictures below show the activity involved in making all the props. To enlarge a photo, click on it. 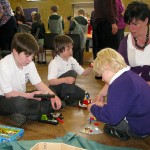 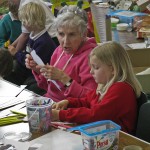 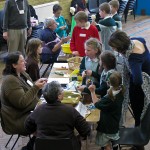 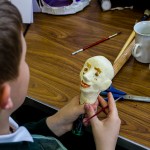 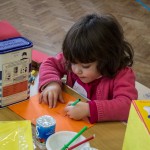 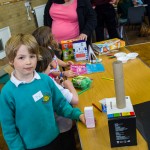