The extent to which we support poeple in our world when they struggle or lack basic amenities  is the extent to which we do what God wants of us. Jim told the story of “Send a Cow”, the charity being supported by St John’s Church, and the way in which we hope, through this charity, to be able to improve the lives of people in the Kakrao region of Western Kenya.

The craft activities involved – making a hat, like a crown, decorated with symbols of peace and love (hearts or doves); creating on a plate the image of a person by using various pieces of fruit (what a lot of inventive ideas); making a flag by choosing a template flag of a different country, colouring it in and adding a stick as a handle; experimenting with a hairdryer to keep table tennis balls in the air supported by the stream of air  (looks like magic as you can’t see the support, like other influences that we can’t see with our eyes!).

Also each child was given a small wooden box to decorate and use as a money box. The idea is for each family to put loose change in it from time to time. The box with its money will then be brought to the next Messy Church and the money put into the small milk churn which is being used as the collection vessel for funds to support Send a Cow.

The devotions continued the story of the people of Kakrao, including prayers for the project. The singing of “He’s got the whole world in his hand” was a suitable summary of the message. The session finished with a meal of fish fingers and chips with peas and sweet corn followed by apple pie and ice cream. 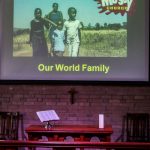 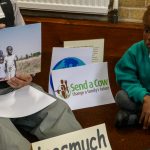 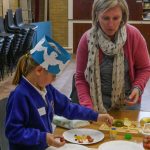 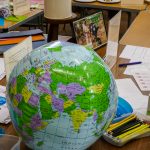