Thinking about the Future of St.John’s

A Day with John Squares 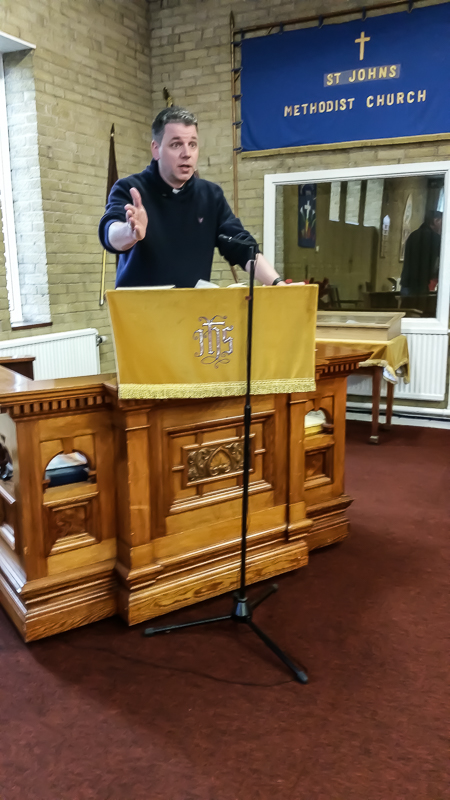 On Sunday February 10th 2016 we were delighted to welcome Rev John Squares to help us think through the way in which we would like to see St John’s develop in the next few years. John is the Learning & Development Officer (Discipleship Development) of the North West & Mann regional team of the Methodist Church. John is linked to Bolton & Rochdale and leads on small group discipleship support and whole life discipleship.

John led our morning worship and reminded us that God will always answer our prayers, though not necessarily in the way we expect. Though we are often feeling inadequate to meet the challenge of the future, we have to remember not to confine ourselves in the way we imagine the future and not to think of the church as its buildings and structure. As an American, John admires the “flat” structure of UK Methodism where everyone can play an important part in planning and mission.

It was then good to enjoy lunch together giving us an oportunity to talk to those we might not have spent much time with for a long time.

After lunch John led us through a process of thinking about the principles of mission. In groups we made notes and then shared what was important to us. We then looked at how we felt about discipleship at St John’s. It was interesting how often the idea of it being a bit frightening and challenging came up. Next, however, we were encourages to think about the positive things that we would expect from a better focus on discipleship. This led to us being able to us starting to identify where we are getting things right and where we need improvement. Finally we began to make specific suggestions about the things we might do as a community of Christians at St John’s.

John expertly helped to draw out some of the themes we had raised so that we can work on them further. He also gave a number of examples of resources which can be used to develop skills such as discussing our faith with people, leading group discussions and increasing our understanding of the gospel message. Although we will need to develop ideas of Discipleship that are just right for us in our own situation, John gave a hint at some of the areas that Discipleship includes:-

Being Called
Being Sustained
Beign Equipped
Being (Trans)formed
Being Sent

This was a very worthwhile day which should help us to plan further, and which will almost certainly have generated further thoughts in our minds.